Edit: I now have a more complete writeup here if you are interested in some of the more low level details of the encoding system.

Last weekend, I was at HackSurrey for my fourth hackathon. As it was my fourth, I felt experienced and knowledgable about how to do things. So, I decided to do something I'd never really ever thought about doing before - 3D printing.

Now, I've done a bit of 3D printing before, with sculpteo before, but I've never actually printed anything manually. As it turns out, it's surprisingly easy to do once you get started, but getting started is a bit tricky and I required a lot of help.

The basic idea of our hack was to create an app that could take any file from your phone, store it on the blockchain and then encode that part of the blockchain in a 3D object. We didn't really get the blockchain bit working as we liked it, due to problems with interfacing with the GuardTime KSI SDK on Android, but everything else got done.

Now this is what this post is mostly about - how to encode raw data in a 3D print. There are two main goals of the design we chose to use:

Here's an overview of what we did:

So the end result of this is a number of hexagons each with 6 triangles at different heights, as you can see below: 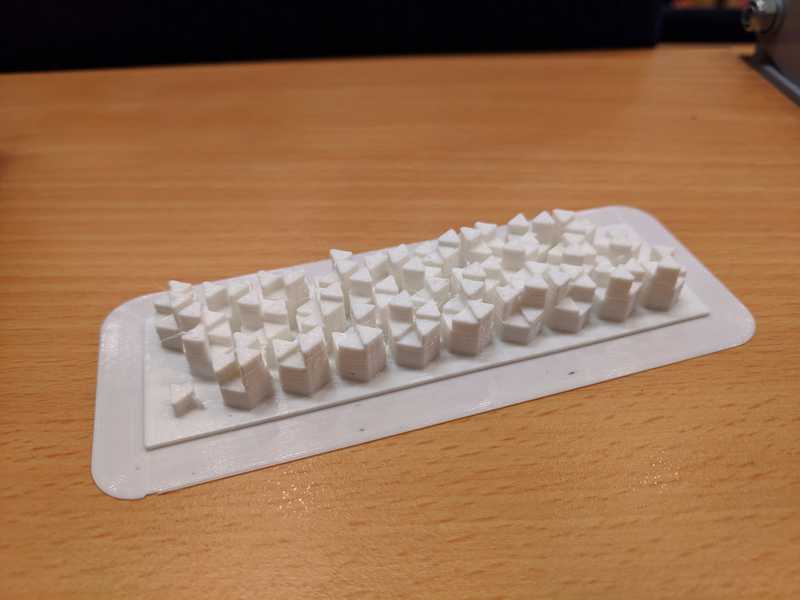 In this case, we've used SHA-256 to hash the data, so we only require 27 hexagons. We've also got a little triangle marker in the bottom left corner, so you can orient it in the correct direction - then you read left to right, top to bottom.

Yes. You did read correctly above, we convert the number into base 720.

Base 720. At first glance (and indeed, second and third glances), this seems like a bizarre choice. In fact, it's actually quite logical - it's the number of possible permutations of a set of 6 items, i.e., 6 factorial. Using this we can establish a mapping between integers and permutations allowing us to easily create representations of a number, but also, and more importantly, get the number back from the representation.

This conversion is done using a factoradic base, you can see the exact details here.

It's kind of a strange algorithm, so if you feel like it's not quite explained well enough, get in contact and let me know :)

So it's definitely not the most space efficient encoding, but you can reconstruct the original data all perfectly, as you don't need to be able to read the heights off, only the ordering of heights. This means it's less likely to be affected by dust or 3d printer errors.

It also is quite pretty.

If you're interested more in seeing how we built it, including the android app, you can check out the repo at https://github.com/jedevc/hacksurrey-2019.